Kava has been an integral aspect of life in Tonga since the 10th Century. The Kava ceremony is carried out at funerals, weddings, courting, sealing relations and gathering of men. The Muller Family has played an importantant and integral part of this history and tradition in Tonga. 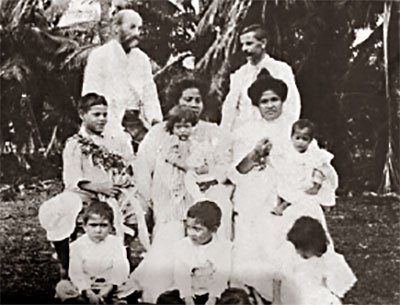 He left Switzerland to come to the South Pacific in 1884 and was employed by a German firm to establish a plantation in the then German colony of New Guinea.  After the failure of the project due to the lack of local labour he ventured via Sydney to Samoa (colony of Germany) where he was familiar with the German language.  He joined the German planters who were heading to the Kingdom of Tonga.  The first German settlement was in Vava’u which is geographically closest to Samoa.

Philipp arrived in Vava’u on the 08 April 1885, where he met a German Trader Gustav Kronfeldt and his Samoan wife Louisa.  Louisa Kronfeld arranged for Philipp G to marry her niece Lauititi O Manono Filomena, daughter of Luatutu of Manono and Ana Fiame of Lotofaga.

Philipp and Lauititi (Laukiki) married on the 6 April 1889.  They had two children in Vava’u, Michael Maria and Johanna.  The family then moved to Tongatapu on the 24 October 1891 where the remaining 7 children were born;  Robert, Franz, Adolph, Carolina, Michaela, Johann Friedrich and  Ana. Of the 9 children, 7 were sent to Switzerland and the remaining 2 were Franz and Adolph.

From the start Philipp G & Laukiki acquired and developed their plantation in Tapakofe, Tongatapu which is an area of land between Fatai and Nukunuku and the plantation prospered. Philipp G began a Copra production business, which was very lucrative.

Philipp G died on the 13 September 1913 and is buried in the Catholic Cemetery in Fatai, Tongatapu.

Fittingly, Philipp G. has left a family that is secure, and to this day is thriving. Today, many of Philipp’s descendants live all over the world especially in the South Pacific and Switzerland. Since Philipp G’s time, the family business has shifted from Copra production to now Kava production.

Today, many Muller’s are certainly indebted to Philipp G for his legacy, his attitude to hard work, his keen interest in everything around him, and his concern for his whole family.

Kava has been an integral aspect of life in Tonga since the 10th Century. The Kava ceremony is carried out at funerals, weddings, courting, sealing relations and gathering of men.

Michael Muller the eldest son of Philipp G returned to Tonga after the death of his father, married a Tongan maiden; Tupou Alo i Ha’amea Taufa Hainamo’uta and raised 10 children.  He worked for the government of Tonga as the Director of Agriculture.  He is remembered for his work in eradicating the rhiocerous beetles (manu kai niu) that devastated the coconuts in the Pacific.

Michael also began planting Kava for recreational purposes then in the 1970s for commercial purposes. His Kava was sold at the local markets in the island of Vava’u. His brother Adolph also planted kava in his residence in Fatai and they were much larger than the average Kava plants. Adolph’s Kava were mainly used as offerings for the royal family of Tonga.

Today, Philip G’s great-grandsons; Hans, Owen and Paulo are Kava farmers.  Hans has employed the local people of Eua to tend to his kava plantations.  He has four staff that maintain 24 acres of kava.  Hans has planted kava in Vava’u and most recently in the island of Eua.

More about our farms

In the past, kava was planted in between edible crops for traditional purposes and it was planted during anytime of the year. Today, due to global warming, kava tends to be planted shortly after a new moon until the next full moon – as this is the best time to plant.

Challenges that accompany Kava production are the weather, excessive heat from the sun and lack of water. When young, Kava plants are fragile and can easily be ripped out of the soil by cylones (hurricanes).

The price of kava is determined by the market and is dependent on the amount of Kava in the market at any given time.

GET IN TOUCH TODAY